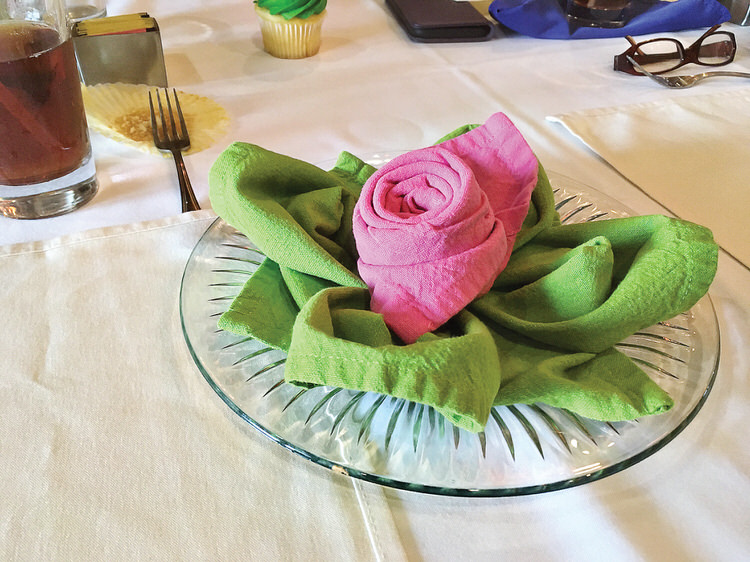 Some of the creations seen at this event. 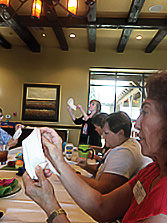 The use of the napkin began in Europe in the 1400s, on tables of royalty, and by the 1800s napkins began to be part of the bourgeois lifestyle, mostly to protect the sumptuous dresses of the period during meals. The art of napkin folding took off around 1880 with the incoming prosperity of the Industrial Revolution. The First and Second World Wars were periods of interlude in terms of the development and use of these decorations.

At the beginning of the 1950s, with the wars being over and people starting to entertain again, the art of napkin folding was revived as a means of expression. There is no doubt that the development of napkin folding has been greatly influenced by Origami, the ancient art of paper folding.

Recently members of the Rockin’ Red Ranchers were treated to a napkin folding “seminar” by Bert Zeitlin, with co-hosts, Betty Gardner, Irene Schlessinger, Amy Schnoll-Gritz, and Rosemary Weinstein. Bert explained how easy it is to prepare some of these napkins ahead of time and have them ready for your next elegant dinner party. After the demonstration, everyone enjoyed a burger buffet at the Wildhorse Grill.