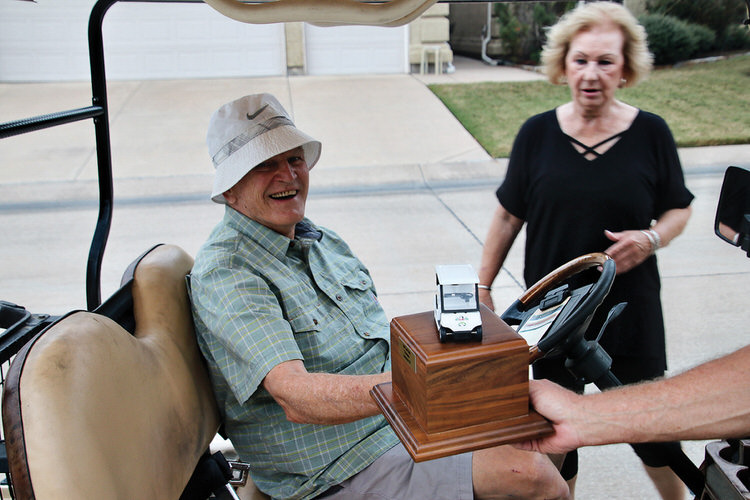 It’s good to be back! We are starting to get out again, gather, and play. And BlocktOberfest on Lynnbrook Drive is becoming a tradition, as well as an expectation.

While Oktoberfest is the world’s largest Volkfest, BlocktOberfest remains Lynnbrook Drive’s largest gathering. And this year’s gathering attracted a record crowd! If you listened carefully, you could hear the Oompah band playing! (Or was that Pandora?)

Kathy and Steve Bailey once again opened their house so neighbors could gather to celebrate the rites of fall, with Betsy and Jeff Duncan providing additional support to ensure a successful event.

A sumptuous array of foods prepared by the neighbors graced the serving tables as we gathered strength for the afternoon competitions. The centerpiece was the assortment of sausages from Fischer’s Market in Muenster. Smoked sausage, regular sausage, bratwurst, and jalapeño sausage were grilled to perfection with loving care. These were accompanied by delectable side dishes such as potato salad, macaroni salad, vegetables, cranberry salad, Jell-O salad, and even lokshen kugel. Later, for the adventurous, came crumb cake, lemon cake, cookies, and other tasty treats. We all sampled them, because we wanted to be good guests!

The games began with several rounds of Texas Toss played on the back 40. Seasoned players tossed alongside newbies as the bean bags flew in the autumn breeze. Passersby stared in wonder as bags smacked the board and fell through the holes as tossers were able to strut their stuff. Coaching abounded as everyone vied for points. In the end, after casual scoring, the results indicated that everyone had a good time.

It was time to adjourn to the street for the highlight of BlocktOberfest: the Golf Cart Drag Races. There had been much jawing and chirping all afternoon, and now it was time for entrants to put up. Course Master Steve Bailey precisely laid out the hallowed quarter-mile track as then entrants wrenched their rides to precise specifications. After a series of qualifying and runoff heats, when all was said and done, Jerry Hollinger shut down the competition and retained the coveted Lynnbrook Drive Golf Cart Race Roving Trophy for another year.

We eagerly look forward to next year’s festivities.