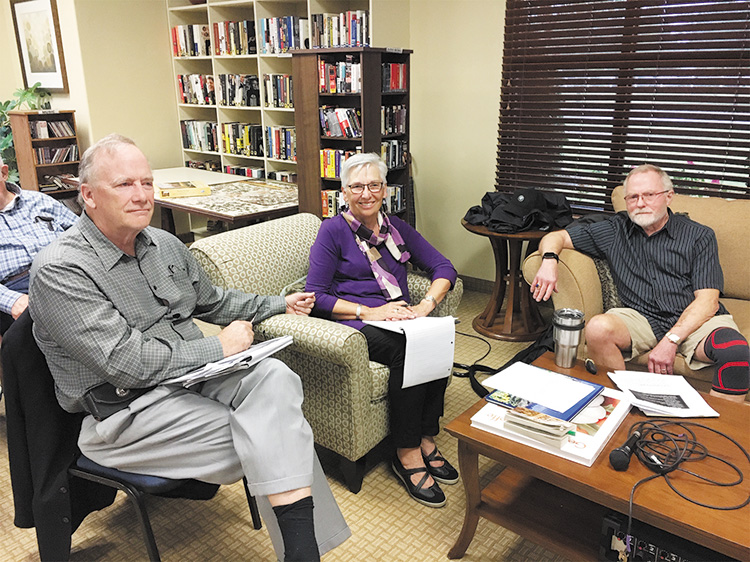 Almost two inches of heavy rain did not deter an energetic audience from meeting in the library for an informative and entertaining discussion of Michael Shaara’s The Killer Angels on Oct. 24. Fifty-four people braved the nasty weather to attend Friends of the Library’s fifth installment in our FRIENDS with WORDS Series. They were rewarded with what several attendees called “the best book discussion yet!”

FOL hosted this discussion as a follow up to our April discussion of Ron Chernow’s Grant. We chose The Killer Angels to contextualize some of the topics covered in April, making the nation’s Civil War history more personal and meaningful. From the audience reaction, this work of historical fiction did just that! A 1975 Pulitzer Prize-winning book, it has been hailed as the best Civil War novel — and possibly one of the finest historical novels — ever written. In it, Shaara tells the story of the battle of Gettysburg from the points of view of the characters themselves — the men who made the decisions and created their own history, and ours, on that extraordinary piece of ground.

The panel of Robson residents leading the discussion did a superb job of presenting the book and drawing the audience intimately into the discussion. General H. Norman Schwarzkopf has called The Killer Angels “the best and most realistic historical novel about war I have ever read.” Panel leader, Brigadier General (ret) Mike Hall, agreed. He and Steve Williams focused on those aspects of the book, discussing the battle, the military decisions, and many “what if” considerations, while LaDonna Womochel provided meaningful insights into the author and the novel’s literary value. Illustrating the discussion throughout was an excellent visual presentation narrated by Mike Hall. Two hours sped by!

If you have an interest in the Civil War and military history and somehow missed this event in the library, Mike Hall and Steve Williams graciously offered to host a small-group discussion in the library at some later date. If you are interested in participating in a small seminar with them, email the FOL Chair, Linda Bono ([email protected]), and we’ll see what might be arranged.

Plan now for our next FOL Book Discussion! Mark your calendars for the sixth installment in the FRIENDS with WORDS Series—to be held on Feb. 27, 2020. The next book for discussion is Lonesome Dove by Larry McMurtry.  This marvelous book won the Pulitzer Prize for Fiction in 1986; placed No. 22 in the PBS Great American Read Vote which was conducted in 2018 for the Best-Loved Novel; and placed high in our own Robson Ranch vote. We have a great panel lined up: Alan Albarran, Dave Parker, and Lewis Toland. They’ll explore the ageless themes of friendship, unrequited love, old age, and death in this novel set in the closing years of the Old West. As a bonus, they’ll also cover the novel’s adaptation as a TV miniseries.