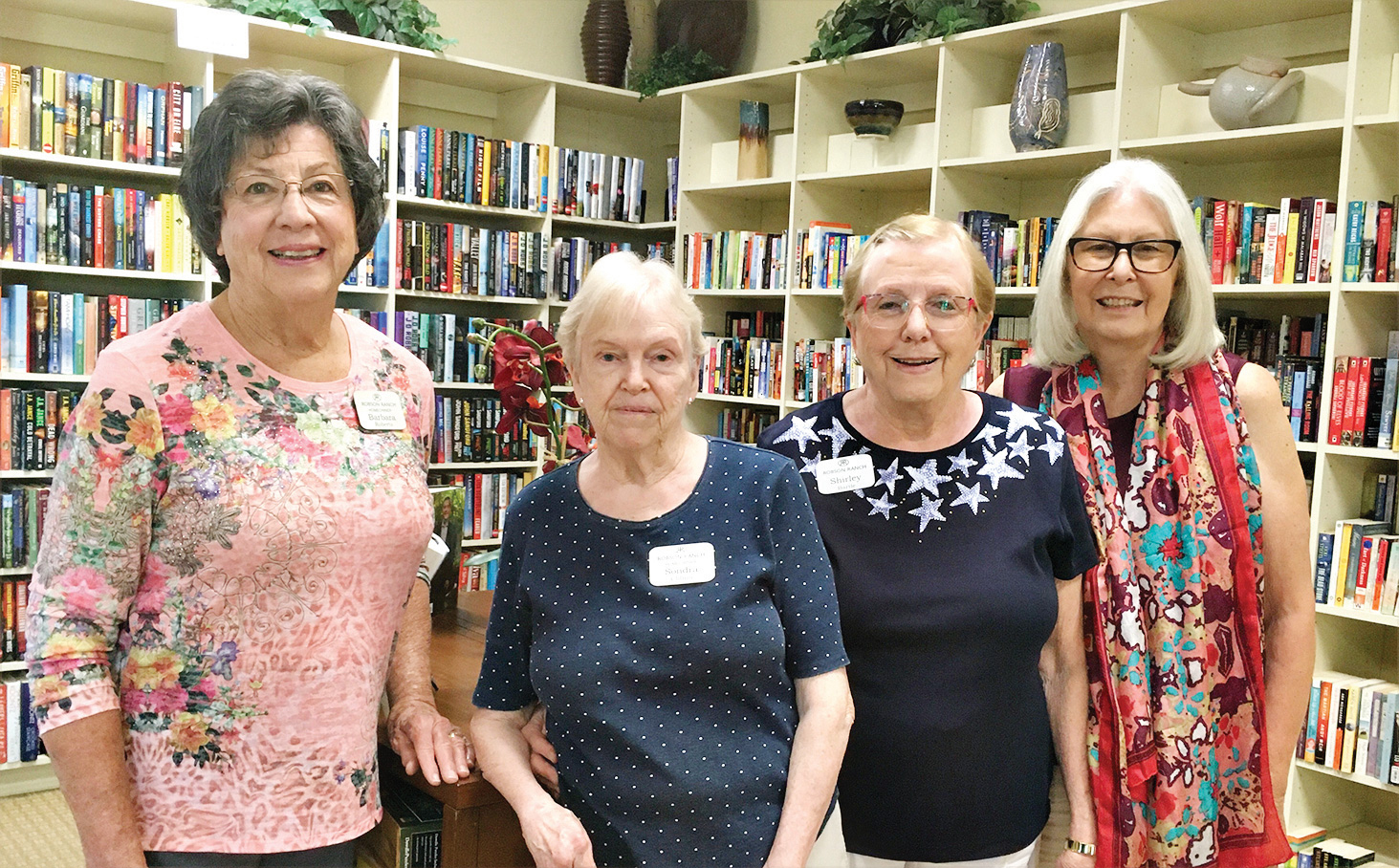 Our all-volunteer library has a great group of workers. Here we introduce the Thursday staff.

Working from 9 to 11 a.m. are Cindy Brekke and Barb Roberts. Cindy “has lived in the north, south, east, and west U.S., and decided to move to Texas 17 years ago,” she says. The retired consultant and eight-year Robson resident says she volunteers at the library “since it’s always been a great resource for me.”

Barb, originally from New York’s Finger Lakes area, moved here nine years ago. She and her husband Clyde have two sons/daughters-in-law and seven grandchildren in Argyle and Keller. Barb taught middle school English and Social Studies before her sons were born, substitute taught while they were in school, and then became an elementary school secretary for 15 years.

From 11 a.m. to 1 p.m. are Shirley Bartle and Suzanne Spisak. Shirley, a three-year Robson resident, is impressed by the quality of our library and says, “I am pleased to volunteer so others can also enjoy it. I formerly lived in Hot Springs Village, Ark., where I chaired the Lakes Committee and served on the board of the Village Loan Closet.”

“Living at Robson Ranch is like being on a perpetual cruise with good friends,” says Suzanne. “Originally from Ohio, we moved here in 2013. Ed Robson Blvd is my jogging track.” In addition to her library service, Suzanne is on the HOA board and an avid mahjongg player.

From 1 to 3 p.m. are Sondra Clifton and Joan Pursley–both members of the library board. Sondra has been a volunteer for eight years, currently working on Thursdays and Fridays. “I enjoy meeting other residents and helping them with their questions or requests,” she says. She also enjoys doing jigsaw puzzles. Prior to retiring, Sondra spent 28 years teaching ESL. Joan, a retired editor and writer, has authored four books—three on collectible dolls and one on wildlife artists—and more than 300 magazine articles on subjects ranging from home remodeling to museum programs for people with disabilities. She loves books, bocce, and her dog Hailey.

From 3 to 5 p.m. are Donna Romano-Gardner and Christine Lovelace. Donna has “always loved spending time in libraries,” noting that her first job at 16 was with the Levittown Library in New York. A three-year Robson resident, she enjoys our many activities and opportunities to engage in charitable work. She is an active member of the Women’s Club and its Community Outreach group, which works directly with Denton charities. Previously, Donna volunteered with Special Abilities and various children’s groups.

“As a retired teacher and life-long reader, I was delighted to find the library here at Robson,” says Christine. She signed up to volunteer on her first visit to the library. “Since I had been on the library board in our hometown, volunteering here was something I wanted to do. I enjoy meeting and talking with people who visit the library.”

For more on the library and volunteering, go to www.robsonlibrary.org.