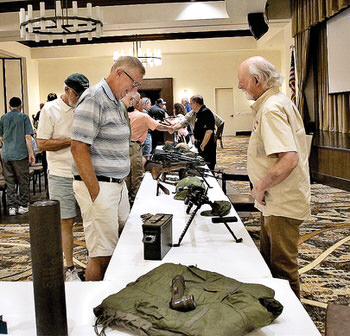 Recognizing the large number of veterans in our Robson Ranch community, honoring the proud service of our uniformed military service members, and in keeping with our club’s mission, the Robson Ranch Gun Club recently held a presentation and display, “Vietnam War Arms.” Nearly 80 Robson residents attended the presentation in the Clubhouse Ballroom, making it one of the club’s largest events of the year. We were especially proud to be able to recognize the two dozen Vietnam veterans in attendance.

With numerous Vietnam veterans living here, we leveraged that priceless opportunity to include some of their personally-owned weapons of the era, including some adversary weapons actually brought back from Vietnam! The presentation included over 22 firearms on display, contributed by Robson residents. These included: an M60 machine gun, several models of the M-16 including a rare Colt 601 (the original model purchased by the U.S. Air Force), M1 Garand, AK-47 and SKS rifles, and an unbelievably unique crossbow, handmade, complete with bamboo quarrels. Many thanks to Kevin Andrews for that special contribution to the display. Complementing these pieces, residents also provided uniforms, helmets, bayonets, and other Vietnam memorabilia.

Attendees were treated to a survey of many of the primary weapons of the era, from the Japanese during WWII, through the post-war French Experience, to the U.S. involvement, and North Vietnam’s eventual victory. This was followed by a quick Q&A session, and then the attendees were able to closely view and discuss the arms on display with the table hosts and with the veterans in attendance.

Even for those knowledgeable about firearms, or Vietnam, this presentation was an opportunity to combine those focus areas and explore lesser-known aspects of the era, such as the prevalence of Japanese weapons in Vietnam (provided to North Vietnam by Russia after Russia’s defeat of the Imperial Japanese troops in Manchuria at the end of WWII) or Chinese weapons (AK-47s and SKSs, provided by Communist China in the mid/late-60s in support of North Vietnamese government troops). This special event of the Robson Ranch Gun Club was fascinating, educational, and brought history to life.

Your Robson Ranch Gun Club has a very special event coming up: on Oct. 14 (Thursday), at 7 p.m., at the Clubhouse, we will hold a discussion and display on Handguns of the Old West. Please keep an eye out for coming announcements!