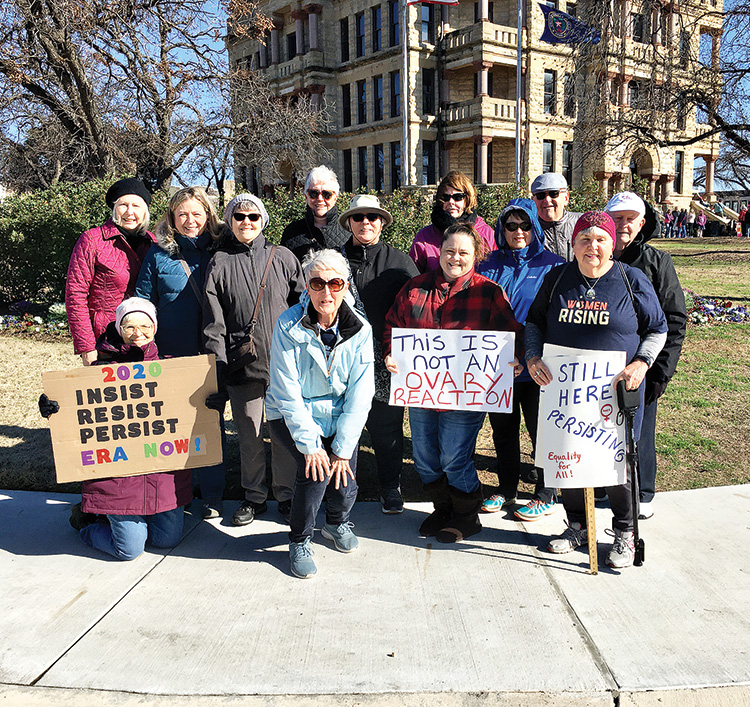 Three years ago (January 2017) a group of Robson Ranch residents, “women and men, some friends, some acquaintances, some total strangers,” notes participant Tracy Olson, “came together, all with the same purpose, to stand together and send the message that women’s rights are human rights.” Out of that first march Voices United was formed, and its members continue to participate every January in the Women’s March on the Square in Denton. Members of the group have also participated in the 2017 Science March and the 2017 March for Our Lives.

This year’s Jan. 18 march included lively music; short but powerful speeches (all attendees running in the upcoming elections were invited to take the mike); and opportunities to register to vote, meet the candidates, and visit with staff from League of Women Voters, Denton. Speakers noted that this is the 110th anniversary of women’s right to vote, reviewed the progress women have made since then, and urged the crowd to continue to fight to protect and advance all human rights. The Voices United women were part of the lively crowd and a good time was had by all. A number of them socialized afterwards with lunch in one of the many restaurants on the Square.

Voices United is a women’s group that supports progressive values. An official club of Robson Ranch, it meets for lunch on the first Saturday of each month. These meetings give members an opportunity to connect with like-minded women. Some meetings have speakers, others focus on members’ concerns and committee work. There is a Steering Committee, plus Social, Public Relations, Community Outreach, Caring, Discussion Groups, and Political Action committees. The Community Outreach committee has organized Fan Drives for Interfaith Ministries and provided holiday gift bags and funds for Meals on Wheels. Voices United also supports Ignite, a national organization of young women who are eager to become leaders. Last year it raised more than $5,000 for Ignite’s Texas chapter.