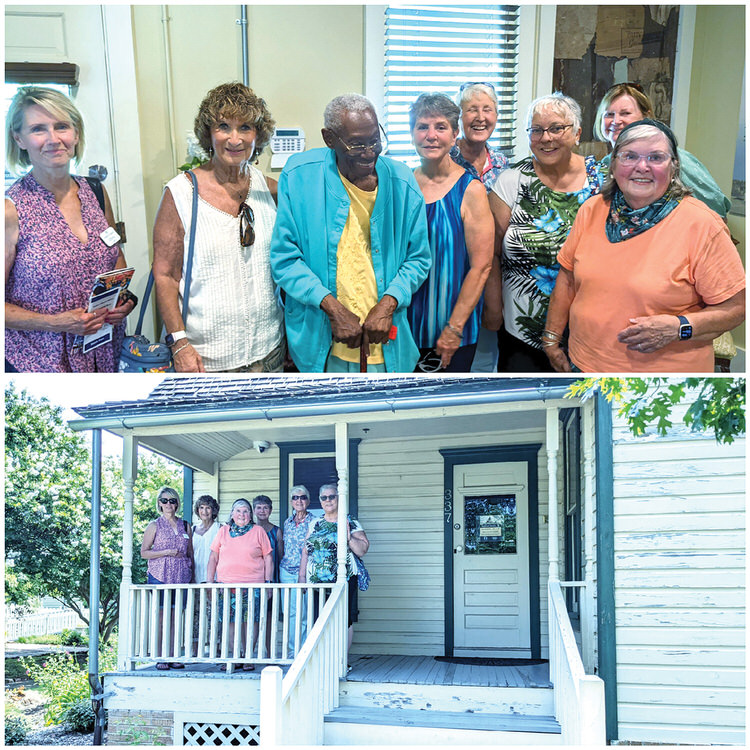 Several members of Voices United (VU) recently visited the Denton County African American Museum. During their visit, they were pleasantly surprised by a chance meeting with Alma Clark, a longtime Denton resident who moved to Quakertown in 1962 with her husband and children. Alma is one of five prominent African American women featured in a mural painted in Southeast Denton on the bridge at Robertson Street and Bell Avenue.

Voices member Janie Cindric had this to say about their meeting with Alma Clark: “We were all like ‘fan girls,’ and she was most gracious to let us take pictures of her with our group.”

Built in 1904, the simple frame house that holds the Denton County African American Museum was once part of an African American neighborhood known as Quakertown, a small community located close to the central business district of Denton. Quakertown, named in honor of the abolitionist Quakers who helped slaves traveling the Underground Railroad, developed into a thriving community by the 1910s with over 50 African American families and several locally owned businesses.

However, the 1920s saw the end of Quakertown after the city relocated the entire Quakertown community (including the tiny frame house) to Southeast Denton to make room for the Denton Civic Center Park.

Today, the house has been relocated again, this time within proximity to its original site, and now serves as a museum, chronicling the lives of Denton County African American families and the Quakertown experience. This award-winning museum also archives the papers and medical supplies of Dr. Edwin D. Moten, Denton’s first African American doctor. The museum hosts special events, including guided group tours, and helps comprise a triad of museums at Denton County Museums Historical Park.