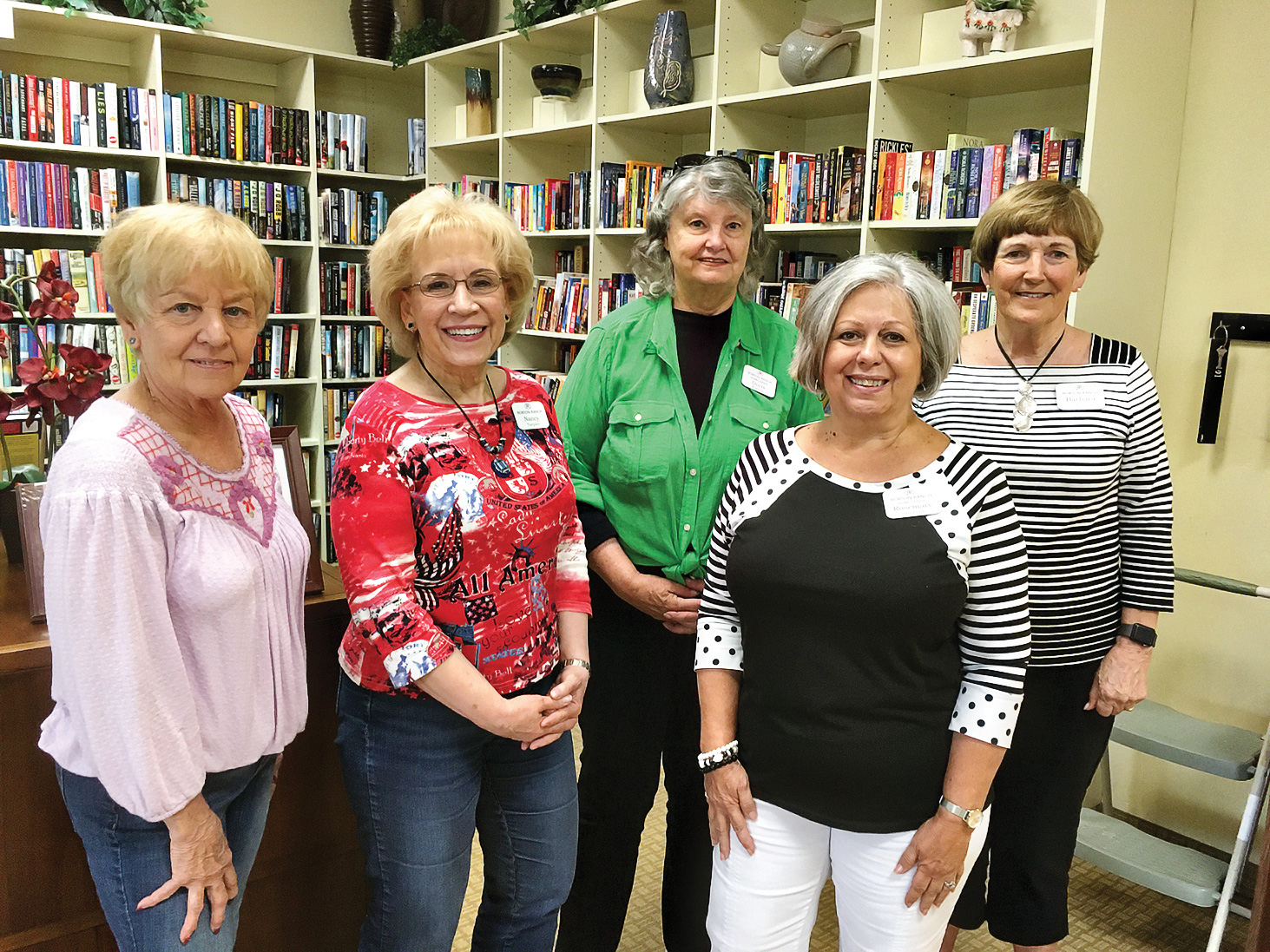 This third article on our library volunteers introduces you to Wednesday’s workers. They are: Rosemary Simecek and Nancy Tarpley (there from 9 to 11 a.m.); Carol Foley and Diane van Naerssen (11 a.m. to 1 p.m.); Barb Alvey and Frannie Howard (1 to 3 p.m.); and Doris Koenig (3 to 5 p.m.)

Many of you will recognize Rosemary Simecek. Besides working in the library—which she has done for about eight years—she is treasurer of the RR Table Tennis Club and leads Tai Chi classes for residents. In her earlier life, Rosemary was in banking.

Nancy Tarpley was a senior technical editor of software documentation for 30 years. She has been a library volunteer for five years and is now working there (with her husband Jerry) on Mondays as well as Wednesday mornings. Both Nancy and Jerry are members of the Library Board.

Carol Foley, a 10.5-year resident of Robson Ranch, previously was the manager of seven Senior Nutrition and Recreation Centers in Lawton, Okla. In addition to volunteering at our library, she volunteers at the Denton Food Bank and is a docent at the Denton Museum. She is a member of Rockin’ Ranchers and Beta Sigma Phi. “Volunteering at the library has been great, especially meeting new residents coming in and those already here,” Carol notes.

Diane van Naerssen, a retired librarian, has worked in several public libraries. She has served on the RR Library Board for about eight years and is a member of its Librarians Committee, which oversees maintenance of our collection. Diane is an avid reader of fiction and a member of two book groups.

Barb Alvey moved to Robson in 2019 with Ray, her husband of 57 years. Her past jobs include 25 years as an executive secretary; she retired from Arco Oil and Gas in 1996. Originally from Kentucky, she has lived in Texas three times, also in Alaska, Colorado, and Georgia. “I enjoy reading, so the library attracted me right away,” she says. Other interests include sewing, puzzles, and golf.

Frannie Howard, a retired CPA, and her husband moved here from Colorado to be near their four sons. She loves to read and is a member of the Villas book club. She says she was “looking for some way to volunteer in the community in order to meet new people—I play a lot of Bridge, but was looking for something different.” She’s been working in the library for about two years.

Doris Koenig has worked in our library for seven years, and served on the Library Board for four years. She is currently the volunteer orientation/training coordinator. Doris was a licensed social worker: medical case management. But having moved 17 times during her married life, was often not somewhere long enough to be employed. Thus, she says, “I volunteered my life away all over the world, from South Korea to Italy to Australia to New Zealand and many places around the United States.”

For more on the library and volunteering, visit its website, www.RobsonLibrary.org.