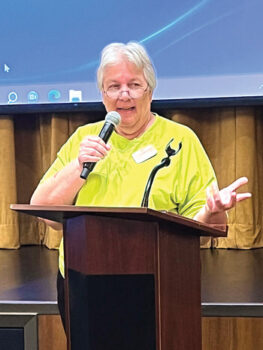 Megan Wiegand, WLN president, started the meeting with a few of the club topics that needed to be reviewed with the membership. Board members provided overviews that included the approval of the revised by-laws, financial status, and miscellaneous housekeeping topics. Once the business aspect of the meeting was finished, the fun began, starting with raffling off several gift items/donations from the Pro Shop and Grill.

Guest speaker and past member of WLN, Mary Ornberg, wrote, produced, and directed a film approximately five to six years ago that she shared with the attendees. The film was a comedy that demonstrates the dos and don’ts of golf etiquette. The stars of the movie, who were both current and past members of WLN, had everyone in stitches over their antics of illustrating both good and bad behaviors on the golf course.

Every quarter, the WLN selects a charity to support via a silent auction and cash donations. Ranch Hands Rescue of Argyle was the charity chosen for June. Ranch Hands Rescue is a human and animal sanctuary founded on hope and healing for the long-term recovery of trauma victims, special needs animals, and male survivors of sex trafficking. There were four silent auction items donated by WLN members and/or local vendors for which members could make bids. Winners of the four items brought in over $600. Cash donations were estimated to be around $300.

Everyone enjoyed a picnic-like lunch that included an assortment of sandwiches and homemade potato chips, with a cupcake for dessert. The luncheon was a great success, with everyone looking forward to the September quarterly meeting.