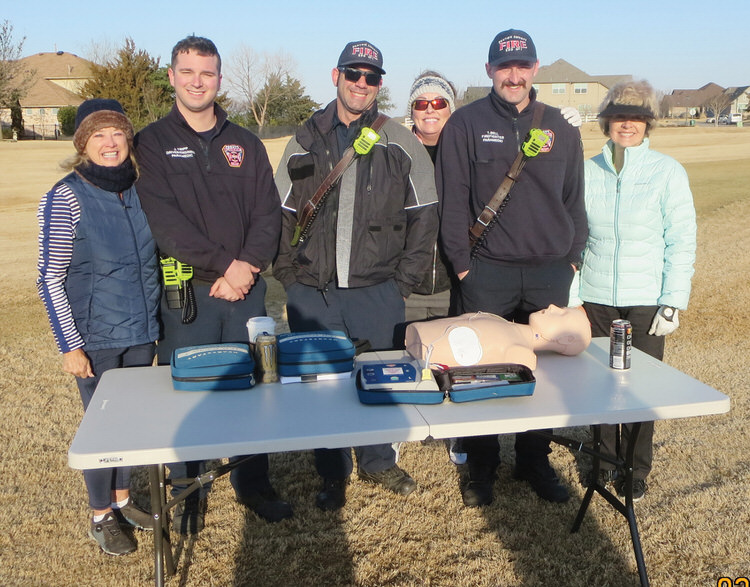 Under the leadership of Diane Bent, Darlene Lamb, Patricia Sands, Maureen Fitzgerald, and Brenda Alford, the tournament attracted 120 women golfers from the RRWGA and the Wildhorse Lady Niners (WLN). The golfers also learned about CPR and use of the AED equipment from Denton, Argyle, Northlake, and Sherman emergency department professionals positioned on par 5 holes. After finishing play, a lunch of heart-healthy food, specially prepared by Jeremy Trietsch and his staff, awaited the golfers. Jenny Eyer, vice president for Health Strategies, and Emily Gerstner, vice president for Go Red for Women Campaign, thanked the women for their support of the AHA and talked about the possible partnerships that could be formed between AHA and Robson Ranch to educate more residents to help save lives from the number-one killer of people in the USA. Lunch sponsors were Wise Health Emergency Center & iCare Urgent Care, Lamar National Bank, Construction by Southern Roots, and Wise Health Surgical Hospital at Argyle. Raffle prizes, a 50/50 split, buying hearts in memory of a loved one, and other contributions yielded a donation of $7,200 for the AHA. This, combined with the $11,000 raised at the 2021 tournament, made an annual donation of $18,200 from the RRWGA to the American Heart Association.

Prizes were awarded during the tournament. Golfers landing closest to the hearts on par 3 holes were Ruth Brock, Chris Hagan, Peggy Puckett, and Alice Wright. Most Creative Decorated Carts were Mary Brock, Shannon Dunson, Vicki Shoemaker, and Jackie Williams. Most Creative Team Name, “Fore Friends with Heart,” was Maureen Fitzgerald, Angie Gay, Sue Halsted, and Judy Markley. The day was filled with joy, camaraderie, and a feeling of satisfaction that everyone had given and gained something special to save the life of someone they knew or would know in the future. Sponsors for the tournament were Southern Roots DnA Boutique, Farmers Insurance, Adams Exterminating Company, Southridge Dental, Leigh Hilton PLLC Elder Law, and Coker, Robb & Cannon Family Law.

Saving Strokes did not end on Tuesday. On March 16 representatives from the AHA, Liz Robertson of Go Red for Women Campaign and Jenny Eyer, came to teach residents how to save a life. With startling statistics, humbling facts, and heartbreaking stories, the women described and demonstrated how to save a life. They showed life saving techniques, and participants got to try out their skills. They also told where eight AEDs are located on the Ranch. One hundred twenty-two Robson Ranchers attended four sessions, and each left with the knowledge of how to assist a loved one, neighbor, or stranger who might need their help to live when the number-one killer, a cardiovascular attack, hits them.