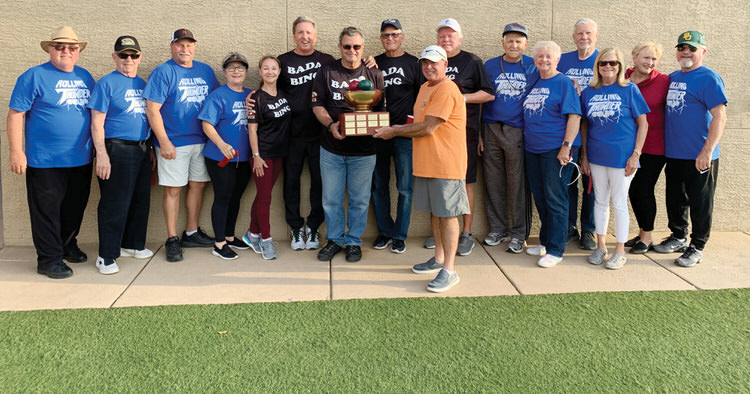 On a perfect fall day, the bocce were rolling, the donuts were flying, and the beer was flowing! Defending champions Wise Guys saw their dream of a third consecutive title dashed in a three-game loss to another prior champion, Rat Pack.

Rat Pack would go on to a three-game “final 4” match loss to eventual (and another prior) champion, Bada Bing Bada Bocce. The “elite 8” round of matches featured all three of these prior champs, plus several newcomers: Total Deboccery, Beer and Balls, Mulliganos, Veni Vici Bocce, and Rolling Thunder. TD apparently benefited from a change in capo (Jimbo).

Rolling Thunder was an amazing story. Spring season was their first. Let’s just say they struggled valiantly that season. The experience toughened them so that they made it to this season’s finals! It’s inspiring! Rocky Balboa would be proud!

Thanks to all the commissioners, capos, players, and board members for making this another great and successful season, albeit the most stressful in our history. A special thanks to John Humphries for his hard work in scheduling and statistics. Thanks also to Shelbi Berg, Rhett Hubbard, Jeremy Trietsch, Jack Sarsam, and the HOA Board for helping us through the season.

Keep your fingers crossed that we’ll soon be playing at our new, permanent home!

Wishing everyone a Blessed Holiday Season and a very Happy New Year! Looking forward to Spring 2022 for another great bocce season.