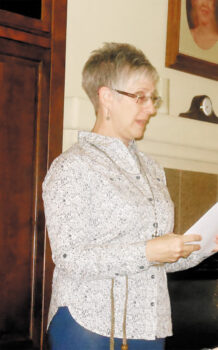 The Robson Ranch Catholic Club met on Oct. 8 at the home of Dr. Alex and Irene Manning. Our guest speaker for the evening was Diane Schwind, who is the Director of Religious Education at St. John Paul Parish, which is part of UNT. Her talk was centered on Our Lady of Fatima. In 1917, three children shepherding their sheep reported that they saw an apparition of an angel, who identified himself as the Guardian Angel of Portugal. On Oct. 13 of the same year the children saw an apparition of The Blessed Mother who told them that there would be a miracle so that all would believe. This has been called the Miracle of The Sun. Her presentation was very informative and uplifting. Diane and her husband co-direct Balanced Families Ministries, a marriage and family apostolate in the Diocese of Fort Worth. Diane and her husband will be back in February to give a presentation on Marriage and the Family.

A short meeting began with prayer. Bill and Francis Ross and Judy Gillespie were introduced as new members who are also new at Robson Ranch. Every Christmas the club has participated in purchasing items to fill gallon Ziplock bags filled with travel size items that will be distributed by Our Daily Bread. Marge Lane asked that the club members bring their filled gallon Ziplock bags to the November meeting. Club members also brought bottled water to be given to the Monsignor King Outreach Center. The evening ended with refreshments and comradery.