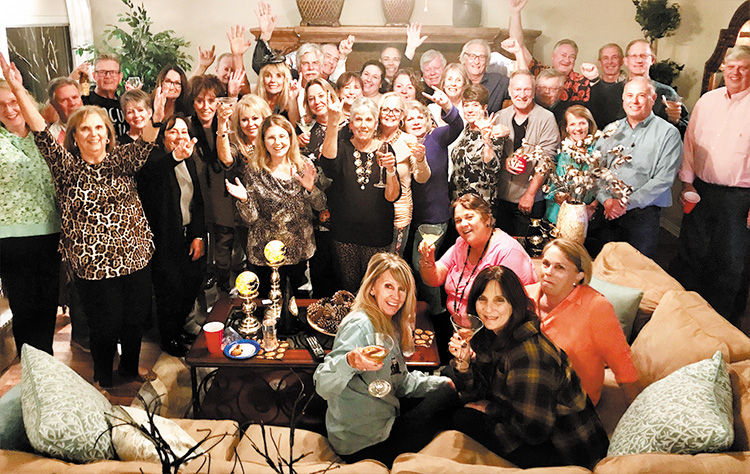 It was a Halloween themed Rock and Roll Martini Group party at Henry and Trish Moore’s in October. As the House Band (host), Henry and Trish picked the classic rock band The Moody Blues. They were, however, renamed “The Moody Boo’s” since Halloween was just around the corner. The Moody Blues’ most successful singles include “Go Now”, “Nights in White Satin”, “Tuesday Afternoon”, “Question”, and “Your Wildest Dreams”. The band has sold 70 million albums worldwide, which includes 18 platinum and gold LPs. They were inducted into the Rock and Roll Hall of Fame in 2018. Selected Moody Blues concerts from the distant past were played on two big screen TV’s but also scenes from horror movies like the House On Haunted Hill, The Shining, Psycho, and The Exorcist. Henry and Trish served up two classic martinis including “Bats Blood” which was a cosmopolitan and a Lemon Drop. They also supplied the Rockers (members) and guests with “bourbon inspired” pulled pork sliders and Halloween cookies. The Rockers and guests filled the kitchen counters with appetizers and desserts. Again, the Rock and Roll Martini Group may have set a record as the largest party ever held in a home. Until next month, ROCK ON!