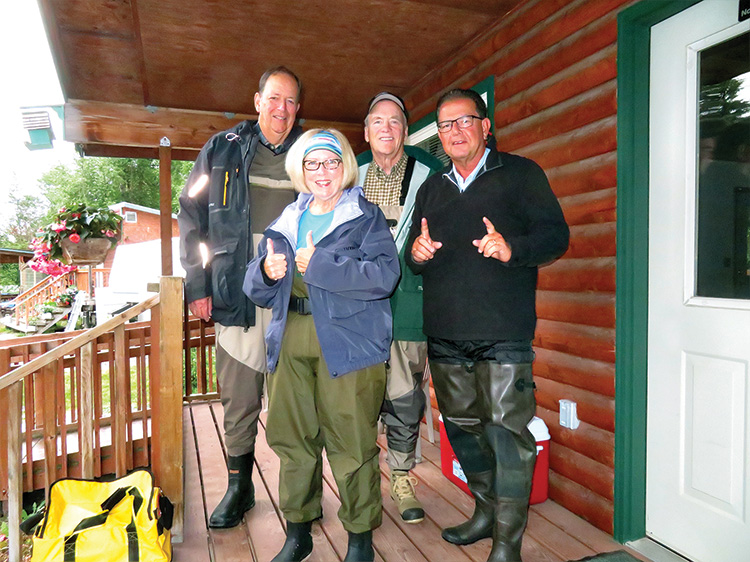 Beyond our dreams; within our reach. 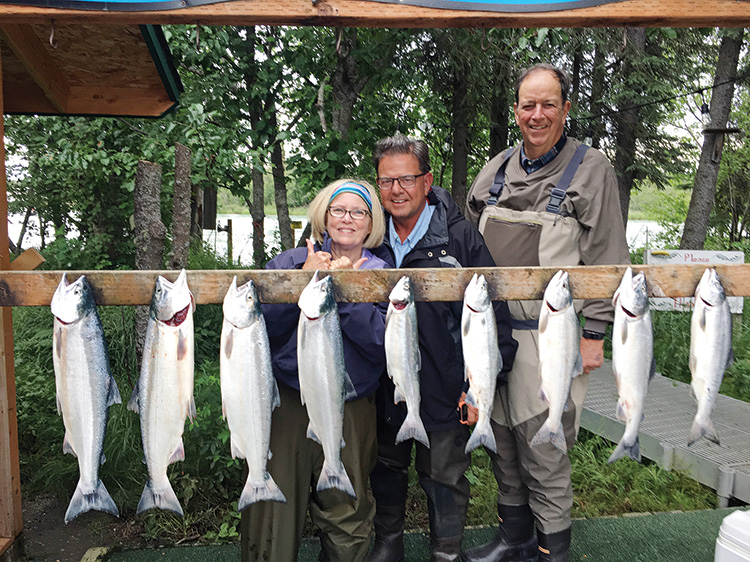 Fishing is fun; catching is better! 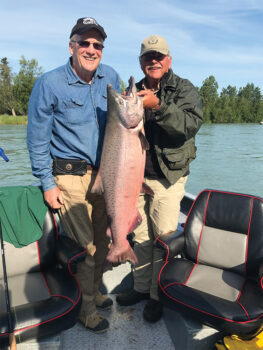 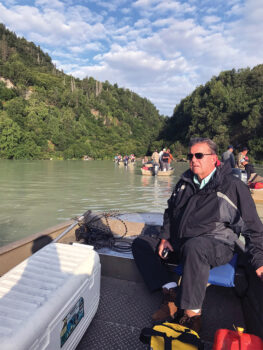 Secret? Was I supposed to keep our spot secret?

Think big…a little bit bigger…even bigger. Picture king salmon and enormous halibut. Imagine fishing in the land of the midnight sun all while bald eagles soar overhead and bears wander nearby. Pure nature at its best, unspoiled and untamed.

We had promised ourselves that Alaska fishing trip long enough. That dream became a reality for Donna Henry, Steve Williams, Clyde Roberts, and Scott Baker. With waders, fishing belts, and cameras packed we were bound for a week of fishing with professional guides from Rod and Reel Charters. Our destination – the Kenai Peninsula with nearly 2 million wild salmon arriving in multiple runs and trophy-sized halibut.

The trip to Soldotna, Alaska, started with a flight from Dallas via Anchorage flying over the Cook Inlet with volcanoes in the distance. After landing, our rental car drive took us past eagles in the trees and moose along the roadway.

Situated on the banks of the Kenai River, our cabins were strategically located in the heart of the very best salmon fishing. Our lodging added to a great river adventure. The peacefulness of waking each morning to the sounds of bald eagles calling out, salmon splashing as they prepared to spawn upriver, and the hum of fishermen casting their lines was truly paradise.

Let’s get fishing! The Kenai is world renowned for salmon by the thousands – no, make that hundreds of thousands – as they find their way into the Peninsula’s bays, rivers, and lakes, returning to where their lives began. Thousands of kings were spotted on nearly every tide. Trolling and drifting in shallow water meant violent strikes with great fights. It was unlike anywhere else – we’d throw back fish that would be trophies elsewhere. Sheer craziness, but this is what the Kenai is famous for: BIG, BIG kings and lots of them.

To reach remote and road-less locations, there was the unmatched thrill of flying in a floatplane for a one-day fly-out of salmon fishing and bear viewing. Enroute we saw spectacular Alaska scenery, rugged mountain peaks, and shimmering glaciers.

Salmon is only part of the draw. We chartered into the Cook Inlet and Resurrection Bay offering some of the best halibut fishing in the world. What an experience to spend a day out on the water, to feel the sea breeze, and reel in that monster halibut!

We’ve been lucky to have traveled to and fished in so many incredible destinations. But none can beat Alaska. So, if a fishing experience in Alaska is high on your list, try both river fishing along the Kenai and a deep-sea charter. These fertile waters provide a virtual bonanza of fishing action and plenty of angling options! But be warned, after you get a taste of catching world class fish in one of the most beautiful places in the world, you’ll yearn for more. You’ll want to return with the migrating salmon each season!