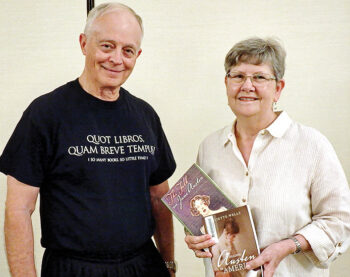 Lewis Toland and Elaine Kushmaul will facilitate this month’s book discussion on Emma by Jane Austen.

Thank you to everyone who attended the annual meeting of Friends of the Library (FOL) in July. We had an impressive turnout. FOL would like to introduce the newly elected slate of officers. They are as follows: Chair Marsha Scholze, Vice-Chair Jane Scholz, Treasurer Jim Ryerson, and Secretary Debbie Blackburn. Please congratulate them if you see them around the Ranch, thank them for volunteering for their positions and help them support our library in any way you can.

Let me entice you with our next face-to-face book discussion of Emma by Jane Austen. Elaine Kushmaul and Lewis Toland will facilitate our discussion in the clubhouse on Aug. 19 at 2:30 p.m. There is certain to be a lively discussion about the book and the roles of men and women in society both past and present.

Elaine Kushmaul is a retired librarian who studied Jane Austen’s work while attending the University of North Carolina. She earned her reputation regarding her knowledge of Austen by doing several popular OLLI lectures on the author’s life and novels. She was fortunate enough to visit the last home that Jane Austen lived in and will lead a discussion on Austen’s background and life.

This will prove to be a multi-faceted discussion. Lewis Toland holds a Ph.D. from the University of Kansas and is a retired professor from the New Mexico Military Institute. While there he spent some time preparing students to attend the Military Academies. A part of his focus with these students was on military ethics. Toland will lead the group by bringing out the humor and irony that Austen used in discussing morality.

If you read the book before attending the discussion it will certainly make the experience more meaningful. Familiarity with the morals of the early 19th century is certainly more fun when viewed through Jane Austen’s humor and through the eyes of the lovable, though sometimes overbearing, Emma.

The book is available in print and audio versions at the Robson library. If it is not possible for you to read or listen to the book, there are a few versions of the story of Emma in movie format. One recent version from 2020 features Amy Taylor in the title role. The TV version, which was released in 1996, features Kate Beckinsale. Another version stars Gwyneth Paltrow. Whichever version you choose to see, or if you read the book or a synopsis, you will enjoy the discussion more if you are familiar with the story and the characters. 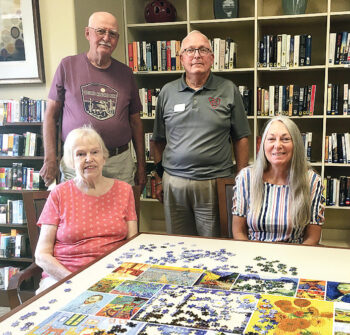 From left to right: Sondra and Gil Clifton, Gary Koenig, and Lynne Barringer. In front of them is one of our puzzles-in-progress, worked on over time by multiple library patrons.

In this fifth article on the volunteers that work in our library, we introduce our Friday group. Before highlighting them, however, we have a Save-A-Date announcement:

On Friday, Sept. 24, at 10 a.m., Hailey Philips and other staff from the Denton Public Library will be here for residents who want to join or renew their memberships. They will also show RR residents how to access their online materials.

Now back to our volunteers: Gary Koenig is the man at the desk from 9 to 11 a.m. Gary has a degree in computer science, and had a long and impressive career running data centers for Ross Perot here in Texas, as well as in other states and overseas. He moved to Robson Ranch about three years ago, after eight years in St. Louis, Missouri. He’s very analytical and can work on software when needed. Like his wife Doris (a Wednesday volunteer and head of the library’s volunteer training program), Gary works also with other nonprofit groups, including Hearts for Homes and the Denton Freedom House.

Rebecca Findley, who works the 11 a.m. to 1 p.m. shift, began volunteering earlier this year. “I get more from the library than I give,” says Rebecca. “I love being in a place that has something for everyone. Regardless of your choice of genre or medium, the library is accepting of every person,” she adds.

Our 1 to 3 p.m. volunteers are Janet Carr and Lynne Barringer, who you were introduced to in an earlier article as they used to work on Mondays. Before moving here, Janet was an executive in manufacturing. Lynne worked in administration at USAA. A three-year volunteer, Lynn especially enjoys opportunities in the library to make new friends. She is an avid reader with diverse interests, ranging from mysteries to time travel and romance. She also enjoys doing jigsaw puzzles, of which there are many in our library.

Gil and Sondra Clifton share Friday’s 3 to 5 p.m. shift. The couple moved to Robson Ranch in 2013, but already knew Denton well because they had lived there for eight years, “decades ago,” says Gil, “while I attended UNT and received two degrees in chemistry. We then traveled across this country while I pursued a career in medical research and Sondra taught school in several states.” Gil has been a library volunteer for five years, is a member of its Board, and was elected Chairman of the Board this past January. His primary objective, he says, is “making our library the most pleasant and useful space possible.” Sondra, who also works on Thursdays, is the newest member of the Library Board and took on the task of arranging substitutes for volunteers who are unavailable for their time slots.

For more on our library and Friends of the Library (FOL), visit RobsonLibrary.org, or stop in and chat with our volunteers. You’ll find they’re a great group.