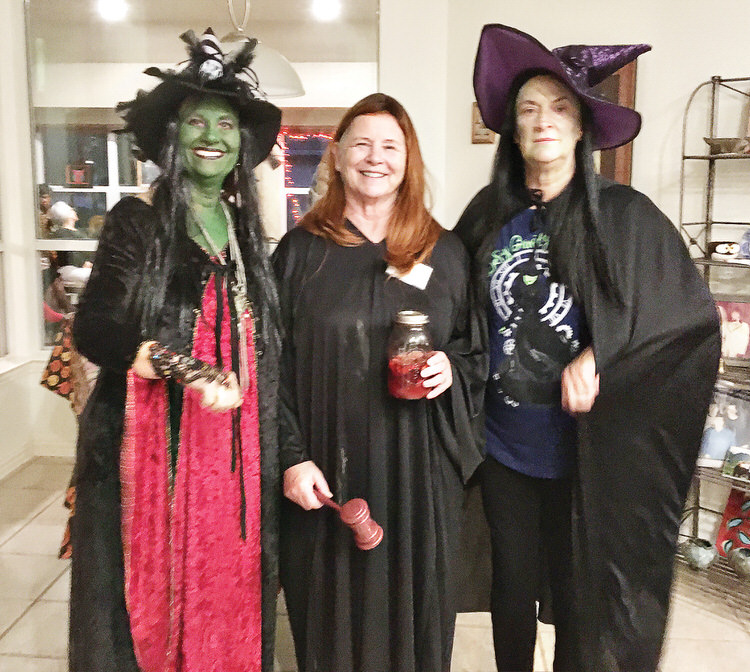 It’s been a busy season for the women of Voices United (VU), a 501(c)(3) organization and official club of Robson Ranch. On the evening of Oct. 30, the group held a rip-roaring Halloween party at Susan Engstrom’s home. Then on Nov. 6, VU had a fundraiser for IGNITE, followed by its annual holiday party on Dec. 4.

The Halloween party began with a chili cook-off: Susan Engstrom, Rebecca Elsen, Renee Smith, Marriott Terry, and Deb Williams each made a huge pot of chili for members to sample. After everyone tasted each offering, they were invited to go back and have big bowls of their favorites and to cast their ballot for the best. It was a tough competition, with each chili getting multiple votes, but Rebecca’s took the top prize. Cornbread, guacamole, assorted munchies, and dessert were also available for hungry Halloweeners.

Costumes were not required, but many turned up in get-ups. There were the Spice Girls, a gorgeous butterfly, a black widow spider, a Supreme Court judge, a jailbird, a jar of mustard, and more. A Best Costume contest was held, and Susan Engstrum (Supreme Court Justice Amy) took first place, with Rebecca Elsen (green-faced witch) in second, and Gloria Sutherland (also a witch) in third.

In addition to socializing, the group divided into two teams to play Pictionary. It’s a challenging game in which team members take turns at a drawing board illustrating a word selected at random. No verbal clues and no physical actions are allowed. The illustrator’s team has a set time to guess the word from the illustration. If unable to do so, the other team gets a chance. Words ranged from valentine (easy) to Yugoslavia (among most difficult).

The November fundraiser for IGNITE was held at Lisa Olsen’s home and featured guest speaker Whitney Thomas, National Alumni Manager. A non-profit, non-partisan organization, IGNITE encourages and assists young women to become active in civil service and political activities. It was launched in California in 2010 and is now active in 36 states. The Texas Chapter, founded by Robson Ranch resident Marriott Terry, was the first to join California. For information on IGNITE, visit IgniteNational.org.

The fundraiser was a huge success, thanks to VU members and Robson residents who bought raffle tickets, participated in the online auction, and donated funds. VU’s goal was to raise $8,000. Happily, the event raised just over $9,000. Sincere thanks to all who so generously contributed to this event.

Highlights from the holiday party will be shared next month. Meanwhile, anyone interested in learning more about VU should visit its website VoicesUnitedRR.org.