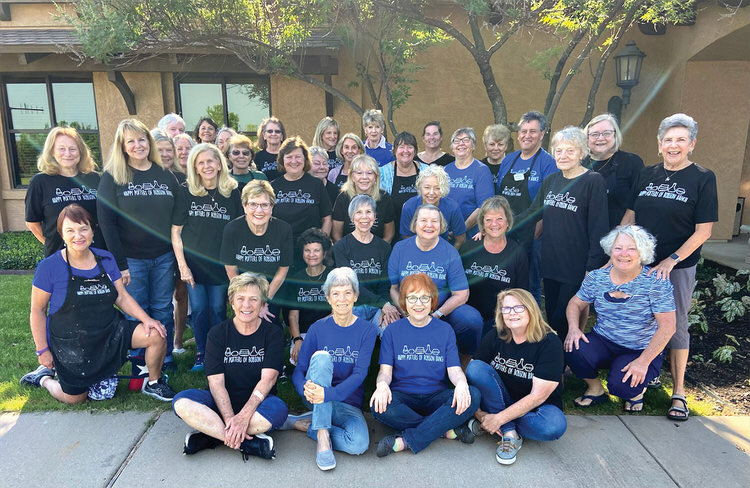 Happy Potters live up to their name! 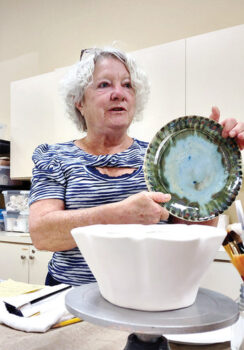 There’s no slowdown in activity at the pottery studio! On Monday, May 16, Happy Potters welcomed a very special guest instructor: Julie Edmonson, sister of Education Committee Co-Chair Jackie Graham and resident of SaddleBrooke Ranch, our sister Robson community in Oracle, Ariz. After claiming spots at the work tables and checking materials and tools, members gathered outside the CATC for a group photo, proudly showing off their club t-shirts and aprons. Then it was time to get to work!

Each participant had previously created an ice cream bowl (in this writer’s case, a glorified saucer) that had been fired to bisque and was now ready for glazing. Julie explained the “peacock” technique, which involved applying black manganese wash in a W pattern around the inside rim of the bowl using a squeeze bottle. Dots of colored glaze were added within this pattern, and the interior of the bowls were completely coated in a second color. During the glaze firing, the manganese causes the other glazes to melt and flow together into unique patterns.

After lunch, Julie took to the wheel and demonstrated a technique that enables the potter to build larger items without having to deal with an initial large quantity of clay. Appreciative members watched as a graceful bowl shape, destined to become a mold for the club’s use, appeared beneath her skilled hands. What a fitting memento for a memorable day!

The Happy Potters also conducted their quarterly meeting in May. Members can look forward to improvements at the studio that will make “clay days” more productive, as well as additional educational opportunities. Six new members, who are already producing impressive pieces, were welcomed. Soon you will be able to see some of their work in the display case outside the studio, along with our peacock-y ice cream bowls—that is, after they’ve been used for their intended purpose!

If you’re interested in learning more about the Happy Potters, stop by the Wine Cup Room in the CATC. A schedule and contact information is posted outside the door. Maybe you’ll be inspired to “seize the clay”!