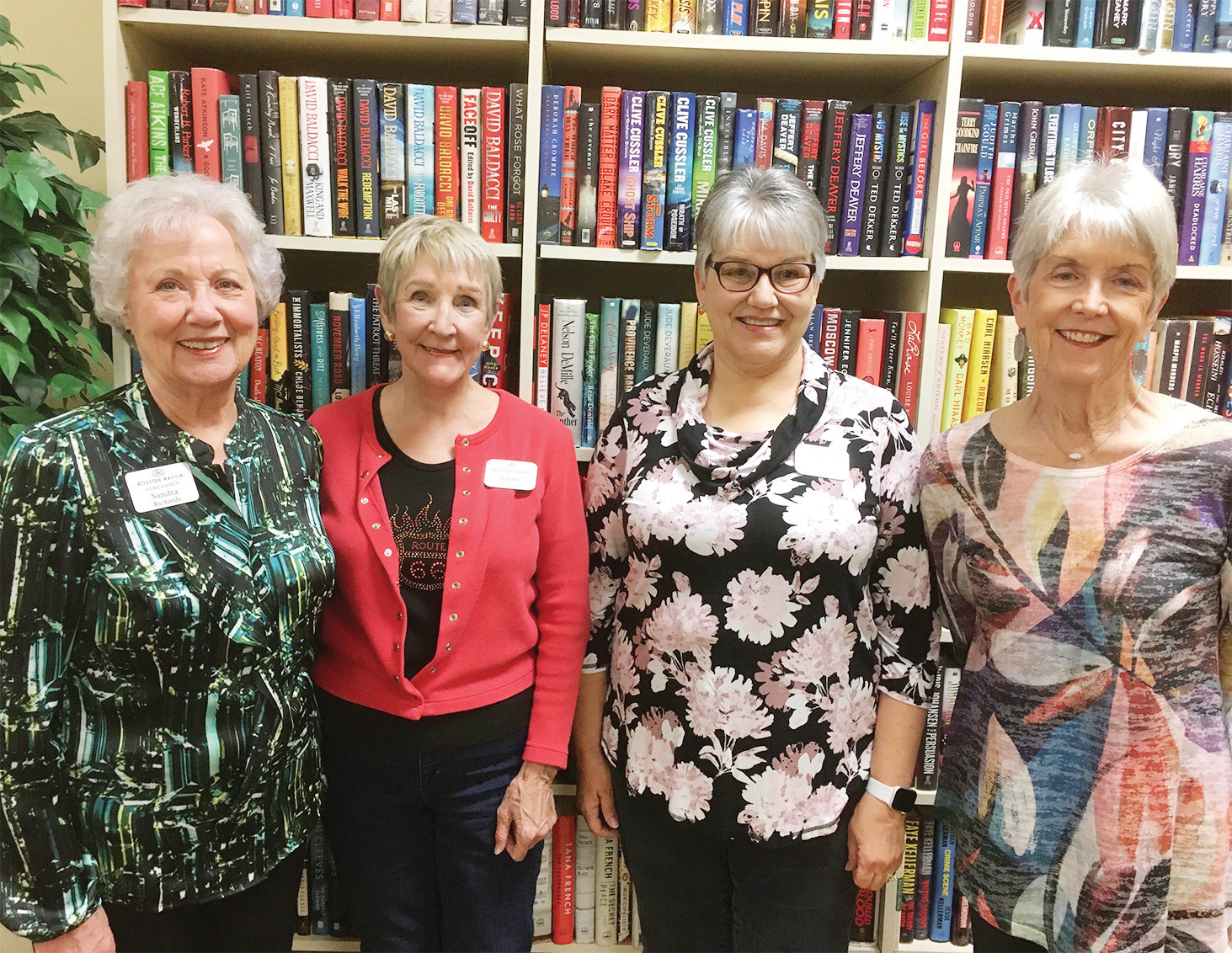 Forty-plus volunteers work in our library. They assist patrons, answer newcomers’ questions about our community, alphabetize the books, and since COVID, sterilize tables, chairs, computer keyboards and mice, pens, and counters. Of course, they also check books, puzzles, books on tape, and DVDs in and out, and shelve the returns. Here, we introduce the Monday volunteers. Others will be featured in future columns.

Marsha Scholze and Charlotte Caruso work from 9 to 11 a.m. Marsha is a former high school advanced placement history teacher. She’s on the library’s board and is also active with Friends of the Library. Marsha created the bookmarks for National Library Week, and heads the committee choosing titles for 2022 book discussions. Charlotte taught second grade in Grapevine before moving to Robson Ranch about eight years ago. “I like volunteering in the library mainly because I love to read, and it is also a way to meet new people,” she says.

From 11 a.m. to 1 p.m., you will find Janet Carr and Lynne Barringer. Janet moved here from Missouri, where she was an executive in manufacturing. “Libraries are valuable, and this is such a good asset. Working here is something I can do to help the community,” she says. Lynne, who worked in administration at USAA, is a three-year volunteer. “Since I love to read, becoming a volunteer seemed like a good fit, and it is,” she says. The library, she notes, is “a fun place to relax and converse, to catch up with neighbors you don’t see every day, especially now because of COVID.”

Cathie Rod and Julie Gronneberg work from 1 to 3 p.m. Cathie was born and raised in Philadelphia, but came to Robson six years ago via North Carolina. She especially enjoys the camaraderie of the library. Pre-COVID, she organized social events for library volunteers. Julie moved here eight months ago and has been volunteering for five of those months. She came to be near her son David, percussion director at Flower Mount’s High School, and his wife Heather, the librarian at Timber Ridge Elementary School. “I had planned to help Heather one day a week, but with COVID that was not possible,” she says. Julie worked in a B. Dalton bookstore as a teen, but became a school counselor, working primarily with children with special needs.

Volunteers from 3 to 5 p.m. are Sandra Richards and Sandra Mankowich. Sandra Richards has been working in the library since its inception. “I was excited when I learned Robson Ranch was getting a library and immediately got involved,” she explains. She was a student librarian in the eighth grade (“knew the Dewey Decimal System”), but chose a career in school administration.

Sandra Mankowich worked in management at Johnson and Johnson prior to moving here in 2012. She enjoys the many sports activities at Robson, but felt the need to volunteer. The library offered the perfect opportunity as, she explains, “I love to read, to interface with people, and the room is so relaxing.”