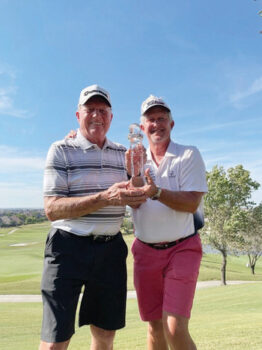 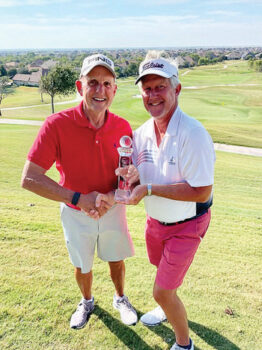 On Thursday and Friday, Oct. 7 and 8, 83 of the best golfers Wildhorse had to offer faced off to do battle in a 36-hole, gross score event to determine the 2021 Club Champion. In addition, this year, a new championship was created, a Senior Club Champion, with that event played from the golf tees for all members who were 72 or older as of Sept. 30. Both championships were played together on the same course at the same time.

The weather was just beautiful—warm and a little blustery, but not anything those who play out here have not faced on a regular basis. After day one, Guy Bent held a slim lead over William Vess, Greg Moe, and Steve Oberholser for the inaugural Senior Club Championship, while Mark Dean held a three-stroke lead over Jim Kirby and Mark Gronneberg, with five others right behind, four strokes back for the Club Championship.

Day two saw the lead of Guy Bent actually disappear as the challengers climbed up the leaderboard. However, at the end of the day, Guy pulled out a three-stroke victory at the end over William Vess. On the Club Championship side of the bracket, Mark Dean was pressed by Scott Eskridge and Raymond Kanemeier on day two, but Mark’s day one lead was too much to overcome, and Mark held on to win the Club Championship three strokes over Raymond Kanemeier.

After the round each day, the participants gathered on the patio to share stories of missed putts and the story behind the dreaded triple bogey. On the final day, the event finished on 9 West, the hole directly below the patio. Most of the participants who had finished gathered on the hill with a cold beer, a few with cigars, to watch and cheer on the finishers. It was a great sight to see the support the MGA members have for each other, even if they were not in the hunt for the championship. To see some pictures from the event, go to www.rrmga.com and enjoy the slide show.

The championship event, while no handicaps were used, was flighted to balance out the competition in each flight. So, we have several more RRMGA members to congratulate of two well played rounds of golf. They are: