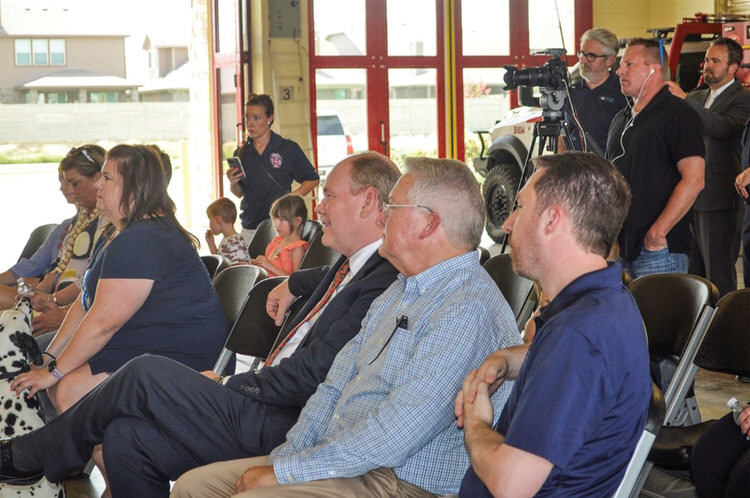 With the opening Tuesday of a connection from the Harvest community into the Ridge at Northlake, police and fire vehicles will have a quicker way to respond to emergencies in both communities as well as into Robson Ranch and other nearby housing developments.

“While original plans for the Cleveland Gibbs Road included direct access to Robson Ranch Road, the construction was not anticipated for several years,” said Precinct 4 Commissioner Dianne Edmondson. So, she spoke with Hillwood Development Company and others about extending Harvest Way to create a quicker route to Robson Ranch Road to serve a large number of residents moving into surrounding developments. From the Fire Station on Cleveland Gibbs, emergency vehicles will go east on Old Justin Road, then turn north onto Sunflower Avenue, then east onto 17th Street and north on Harvest Way, which changes its name to Briarwood and extends all the way to Robson Ranch Road.

ESD#1 Fire Chief Mac Hohenberger, who indicated growth within the service territory resulted in a high level of calls at Station 514, said the new route will enable his team to deliver services to Robson Ranch three to four minutes more quickly, which is going to increase patients’ odds by 30 to 40 percent for survival.

Following the ribbon cutting at Station 514, Chief Hohenberger led a parade of vehicles along the new route to demonstrate how quickly emergency services personnel can now reach individuals in need of assistance.

“The interim route is the first phase, with a second phase planned soon from the Harvest development straight to Robson Ranch Road to continue improving access for emergency services response,” Commissioner Edmondson said. Ultimately, Cleveland Gibbs Road will connect from the north in the Ridge in Northlake to the Harvest portion, creating a direct route into the main gate at Robson Ranch.

“The best things happen when we all work together on one team,” Commissioner Edmondson said.