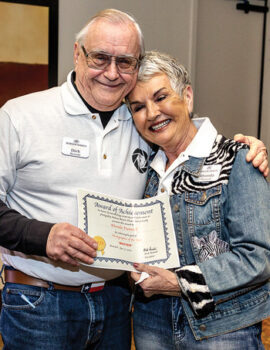 On Jan. 17 the Robson Ranch Photo Club met in the clubhouse for the annual night of awards for accomplishment in 2021. An excellent program was presented by Edgar Miller, of Edgar Miller Images, on “Photography and the Third Dimension,” on techniques to add depth to the two-dimensional representation of a three-dimensional world. Edgar was also the judge for our annual Image of the Year competition. The Image of the Year award is presented in each of the three divisions of the club: Basic, Advanced, and Master.

In Basic, the Image of the Year was Key West Sunrise Mirrored, by Steve Simpson. Second place was awarded to Carol Culkin, and Steve also had the third-place finisher. Honorable Mentions were awarded to Steve Simpson and John Steen. In the Advanced Division, the Image of the Year was Deco Power, by Ray Davis. The second-place image was by Clay Hodson, and third was also by Ray Davis. Honorable Mentions went to Betty Alvarado and Clay Hodson.

In the Master Division, Rhonda Pummill’s Across the Rio Grande We Go was judged first, and she also had the second-place image, while third went to Ron Ice. Rhonda and Ron also had Honorable Mention entries. The Best of Show, or Photo Club Image of the Year, was Rhonda Pummill’s Across the Rio Grande We Go. The Best of Show and the three first-place images will be on display in February in the Photo Club’s display window in the CATC, just outside the library.

Photographer of the Year awards were also presented in the Advanced and Master Divisions, based on the cumulative results of monthly competitions that are judged by external judges provided by the Photographic Society of America. Betty Alvarado received this award for the Advanced Division. Rhonda Pummill made it a three-peat in the Master Division as recipient of this year’s Photographer of the Year award in that division. First runner-up in Master was Nick Alvarado, and second runner-up was Barbara Finney.

The Robson Ranch Photo Club is open to all Robson Ranch residents with an interest in photography, regardless of equipment, from cell phones through various levels of digital cameras, and even including drone photography. We meet the third Monday of the month in Room 104 of the CATC. Contact Dick Remski at 940-262-0194 or [email protected] for more information.