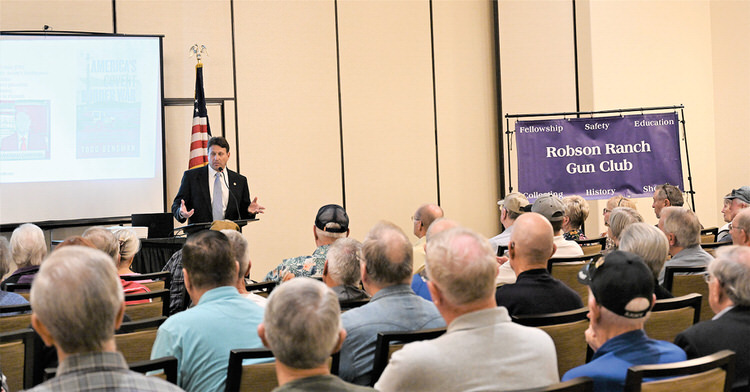 Todd Bensman gives an eye-opening presentation to over 100 Robson residents.

Closing our successful 2021, Robson Ranch Gun Club was pleased to have a fantastic guest for our November monthly meeting speaking on the topic of Border Security.

Native Texan Todd Bensman, a Senior National Security Fellow for the Center for Immigration Studies, frequent guest on nationally televised news programs, and author of America’s Covert Border War: The Untold Story of the Nation’s Battle to Prevent Jihadist Infiltration, spoke for an hour to over 100 attendees from the Ranch. This was the Gun Club’s largest-ever monthly meeting, a testament to the interest in this topic by our community.

With over 20 years of journalism experience, during which he received numerous awards, followed by almost a decade of work with Texas Department of Public Safety Intelligence and Counterterrorism Division, Mr. Bensman is a nationally recognized voice on issues of border security. He has spent the last several years working both sides of the U.S./Mexico border, and he brought these experiences and his first-hand observations to his presentation. Credit to our club’s program director Warner “Kimo” Sutton for bringing in such an interesting and timely speaker. And since Todd is based out of Austin, Kimo went the extra mile and let Todd stay the night in his home here at Robson, too! Unexpectedly, we were joined in our meeting by our Representative from the 64th Texas Congressional District to the Texas House of Representatives, Lynn Stucky! Rep. Stucky attended specifically for Todd’s talk, and during the Q&A session, invited Mr. Bensman to come speak to the Texas House. Following the meeting, Todd made copies of his book available, and interested residents bought 40 signed copies!

For your Robson Ranch Gun Club, 2021 saw 87 new club members, 5 classes (Basic Pistol, LTC), we held three special evening events (The Smith-Enfield, Vietnam War Arms, and Handguns of the Old West), gave 20 raffle prizes, and thanks to the stellar work of Mary Ellen (“Mel”) Steibel (our Women’s Group lead) we had a 300% increase in our Women’s Group membership (from 14 to 61). We’re excited about 2022!

Taking December off, like most Robson clubs, to spend time with our family and focus on the holiday season, our next monthly meeting will be Jan. 11, 2022. Also, keep an eye out for our first event of the new year, “Long Guns of the Old West,” to be held on Thursday, Jan. 13, at 7 p.m. in the clubhouse. Watch for announcements.