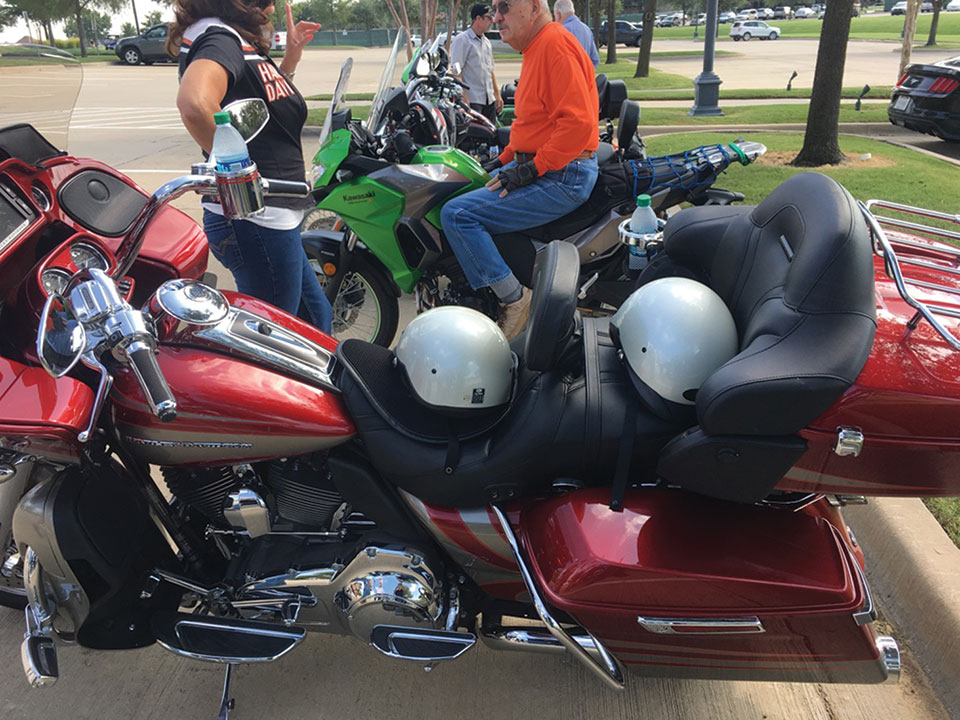 While there were no planned club rides in August that didn’t stop folks from gathering and riding. Ricky Hales had a rare day off on August 10 so he said, “Let’s ride.” And ride we did! The lunch destination was Mary’s Brazos Café in Tin Top. Well it’s really in South Weatherford, far South Weatherford. Steve Haugen, Jim Sico, Pam and Dennis Dotson, Norm Zilinsky, John Nagy and Stan Brein joined Rick for a great ride west and down Hwy 51 to this down-home eatery, which offers hamburgers to goulash to chicken fried steak. Prices are reasonable, and the food is plentiful. And the fellowship…

A couple of us visited a bash at Moto Liberty on August 19. Located on I-635 east of I-35 in Farmers Branch, they have been voted the number one gear store in Texas by Ride Texas Magazine. They are a rarity in that it is a woman-owned motorcycle store. Audrey Menarik is the owner. Look her up and read her story about buying the old store in 1999 for $10 and turning it into the great gathering place it is today. The selection is vast, and the service is exceptional.

The board (Scott Baker, Mike Conley, Dennis Dotson, Stan Brein and Edward Barnett [not present]) met and did some further planning for future events. The September lunch ride will be to the Lucky Café in Whitesboro on September 12. The dinner ride will be to Gogo Gumbo in Boyd on September 28. Dennis Dotson brought his collection of Butler Motorcycle Maps. If you haven’t seen these, take a look on line. They are foldable, durable maps that are specifically geared to motorcycle riding. They have great detail and accuracy!

Upcoming events include going to Wing Ding at the Gaylord Texas Resort in Grapevine (August 29–September 2), lunch ride on October 10 and a dinner ride on October 26. We are also planning an overnight outing and two to three day excursion. In addition we will combine a member meeting and social event at the Grill.

See you on the road! Beware of cagers and keep the rubber side down!