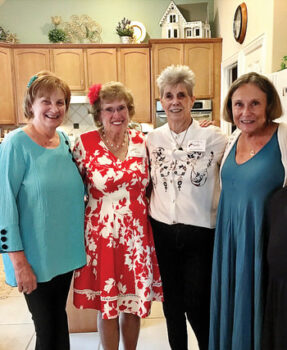 The Ladies with Hattitude enjoyed a Tea Party Luncheon at the home of Jean Euker. As they all arrived, a torrential rain hit, but they continued to come walking through rivers of water to get inside. As they arrived, they drew table numbers to see where they would be sitting. A table helper had been assigned to give them a hot cup of tea to warm them up. The table helpers also made sure the tea pots stayed filled for everyone to have lots of refills.

A short meeting ensued saying goodbye to two members who were moving away but welcoming in two new members. After the meeting, they enjoyed a tea luncheon with choices of different kinds of finger sandwiches along with deviled eggs. Then a tray of assorted tiny desserts was served.

After lunch, games were played with prizes going to several people. At the end of the games, Jean announced that everyone was a winner as they could keep their cute little pink pencils that were used to play the games. Everyone enjoyed themselves and left under a clearer sky.