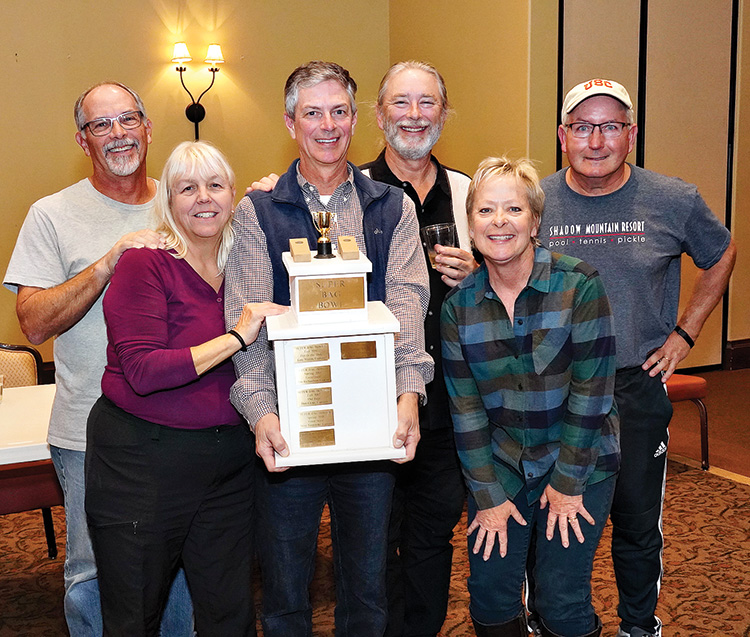 On Friday, Nov. 15, the world-famous playoffs for Texas Toss were held in the ballroom of the clubhouse. The top 12 teams squared off to crown the Super Bag Bowl VII champion. Since the playoffs were held indoors, there were no winds to adjust to. Steve Targonski, World Wide Commissioner of Texas Toss, was set up at the command central table in the center of the room. Cindy Sterling, World Wide President of Player Personnel, assisted Steve in running the playoffs. The bar was set up in front of the stage to provide “aiming fluid” to all interested players. In a surprise, the two-time defending champion, Team Leprecorn and Captain Jim McCracken, was defeated in the Sweet Sixteen by Cornfused and Captain Jim Richardson. It all came down to the Final Four. In the third and fourth place game, Cool Screens Texas Slingers and Captain Guy Myers defeated Cornfused and Captain Jim Richardson. In a tense battle to be the Super Bag Bowl VII champion, Airmailers and Captain Steve Courtney defeated Corn Stars and Captain Steve Targonski. Airmailers will return in the spring to defend their title. Their name has been added to the prestigious Texas Toss Super Bag Bowl trophy. Congratulations to all participants in season VII.