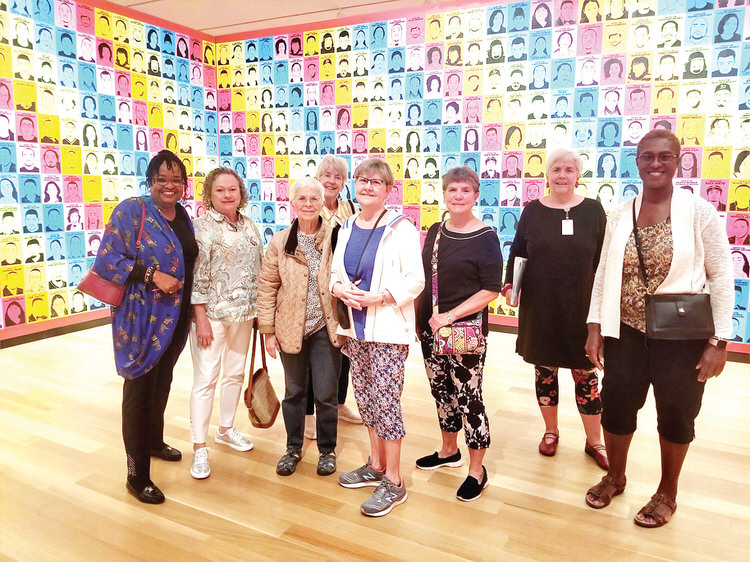 Museums have long been our cultural gatekeepers whose main task is to collect and preserve cultural objects. There’s no question museums provide an essential, interactive, and engaging way to highlight cultural histories—both our own and that of other peoples. To open the doorway to these other cultures, Voices United members, through its Diversity in Action Committee, visited the Amon Carter Museum of American Art for viewing “Printing the Revolution!: The Rise and Impact of Chicano Graphics, 1965 to Now.”

The docent-led tour of this special exhibition (all the works of art are part of the Smithsonian American Art Museum’s permanent collection of Latino art) explored the rise of Chicano graphics during the social movements of the 1960s. The showing included 119 works by more than 74 artists of Mexican descent and other artists who were active in Chicano networks. The artists were generally self-taught; there were no art degrees or commissions. These were simply people with a need to say something about themselves and their plight.

The artists used screen printing and computer graphics as a means to debate the larger social causes and issues of their time, including immigrant rights, labor practices, opposition to the Vietnam War, feminism, and the civil rights movement. Posters and prints announced labor strikes and cultural events, highlighted the plight of political prisoners, and challenged the invisibility of Mexican Americans in society.

The Amon Carter Museum united art and social activism through historic and contemporary artwork that deeply resonated with social issues we’re still grappling with today. Voices United members were reminded that we are a part of history, and we continue to define our future as we preserve the past and amplify all voices.