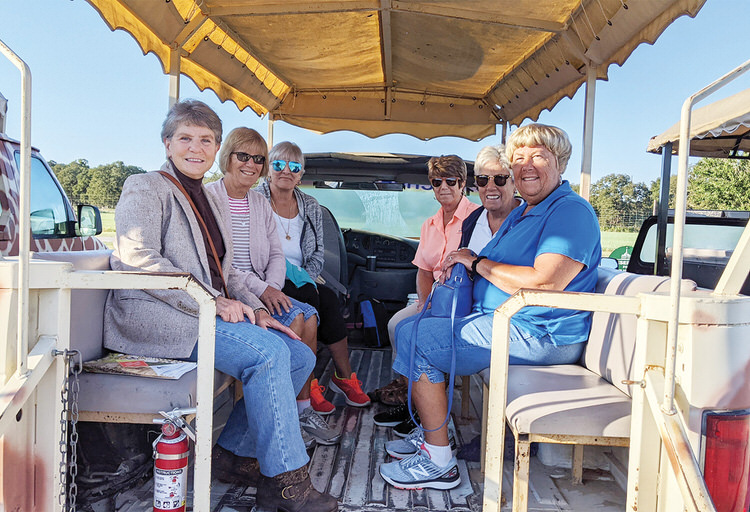 Girls on Wheels on safari

A safari in Texas? No way! Yet, here Girls on Wheels (Vicki Baker, Nancy Burns, Karen Dipietro, Cassie Richardson, Susan Hebert, and Lois Reinhart) were on a wild game adventure at Fossil Rim Wildlife Center. It almost felt like Africa with the great migration of millions of animals moving through the savanna. Okay, maybe there weren’t millions, but it definitely had the look and feel of a safari. This certainly wasn’t just a “drive-through zoo.” No zoo ever offered such close animal-to-human encounters in such majestic natural settings.

Resting upon 1800 acres of scenic vistas and canyons cut by the Brazos River through ancient limestone, Fossil Rim is one of the world’s foremost wildlife conservation facilities and the first-ever “non-traditional zoo” accredited by the Association of Zoos and Aquariums. It’s home to more than 1100 rare, threatened, and endangered animals spanning four dozen species, freely roaming across large pastures of mesquite and juniper-oak woodlands, save only the carnivores and rhinos.

Girls on Wheels chose the behind-the-scenes guided tour—a three-hour tour in an eight-passenger, open-air vehicle, which traveled along the 7.2-mile Gosdin Scenic Drive and into the restricted Intensive Management Area (IMA). With our knowledgeable guide, we got a comprehensive glimpse of Fossil Rim’s conservation-minded mission while picking up interesting facts about its many animals.

At the start of our drive, we were each handed a cup of food. As so many animals came running up to the truck looking for a handout, we carefully doled out the food to avoid running out too quickly. A few of the animals were much “friendlier” than others, and we quickly discovered ostriches don’t really give a feather when it comes to manners or personal space during snack time!

The giraffes were the most popular stop on the feed run. As we held food pellets out the windows, towering giraffes leisurely approached us, our eyes now level with stilt-like legs just inches away. Their heads descended slowly, and the reddish-brown muzzles neared. We extended our arms, and the giraffes brushed our open hands with soft, whiskery lips, nuzzled for a moment, then graciously lapped the pellets.

As we traveled along the route, we also soaked up views of other exotic animals from Africa, Asia, and South and North America, including wildebeest, mountain bongos, addaxes, oryxes, rhinos, zebras, and waterbucks. In the intensive management areas, we saw rare wolves and cheetah families and learned of Fossil Rim’s accomplished work in preserving threatened and endangered species.

In an ever-shrinking world, Fossil Rim Wildlife Center was a rare Texas adventure, making us feel like we were thousands of miles away. Girls on Wheels experienced the sights and sounds of an African safari, giving us a unique opportunity to step into a world we otherwise wouldn’t be a part of—an opportunity to get up close and personal with so many magnificent creatures.