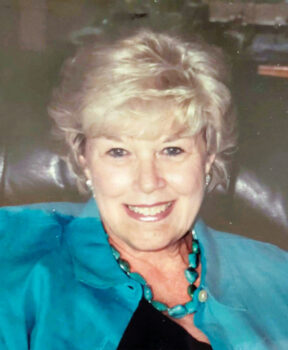 Joan was born April 9, 1941, in Cincinnati, Ohio, to Richard and Mabel Bauer. She graduated from Withrow High School and enjoyed singing in the Minstrels there. She would go on to attend the University of Cincinnati. Shortly after, she worked in the Executive Department of a local department store and at one time modeled clothes for Phil Donahue to purchase for his wife Marlo Thomas.

In 2006, Joan moved to Robson Ranch and was very active. An avid bridge player, she was a member of several different groups in and outside of Robson and cultivated many friendships. She was employed by Robson’s Food and Beverage Executive Department doing the marketing for the Wildhorse Grill. She played a role in several committees, including the Women’s Club. Joan was a member of a close group of friends who traveled and lived life together and called themselves the “LOL’s.”

Joan was one funny gal. Her quick wit and ability to make everyone feel included influenced all of us. Not only was she larger than life, so was her jewelry. She will never be forgotten. She truly was “one in a million.”

If so desired, memorials may be made to Lifting Kids at LiftingKidsGT.com. This is Joan’s niece’s daughter’s organization that she loved.

A Celebration of Life service will be held for friends and family on May 9 from 3 to 5 p.m. at the Robson Ranch Clubhouse.